I have always wanted a rhombic ever since I heard Jim, ZL2BE, on 20 meters in the 1950’s as a 14-year old. He was using a rhombic and he was head and shoulders above everything else on the band. Of course, at that time, most people were using low wires. I don’t think there were many towers and beams in the UK in those days. However, I never had the real estate to put up such a monster until I moved to Swardeston, in Norfolk, and I bought an old nursery with about 8 acres of land. Plans became diagrams on paper and discussions with other locals, and we mapped out a suitable sized rhombic. It took me several years to eventually get this up in the air, and this is the story, with pictures! If you are sitting comfortably, I shall begin.

I already had a 120ft tower holding up my TH7DXX and I had to find three other supports. A local amateur in Thetford, about 30 miles south of me, had a 65ft crank-up tower for sale, quite reasonable, so I bought that. He even delivered it to me, for which I was grateful. My son Robert did some welding on it and we managed to assemble it ready for amateur use. It was a lighting tower and had all sorts of bits that were not needed, plus we had to weld and assemble a winch bracket, and re-rope it. Time passed and I managed to find a few old ten-foot triangular sections, about 5 in total. These were made ready to assemble, but I could not find any more. I was just about to give up, when I saw an advert in Radcom for ten of the very same sections for sale in Leeds. I did the deal on the telephone and my son and myself loaded up a borrowed trailer and went after them.

The journey back to Norwich was slow, because every time we exceeded 50 mph, the trailer started to wobble. We had to stay at around 45mph all the way home. We made it back OK, and then spent a while sorting them out, repairing one, and buying some nuts and bolts to bolt them together on the corners. I assembled them in four 40ft sections, made sure all the bolts were tight and then hired a crane to hoist them. Prior to this, my son had spent a long time trying to make a jig so I could hoist them individually, climbing as I went. This we found to be impossible, there was far too much weight.

The day came, and the crane arrived. I had to saw a few branches off trees so he could make the journey around some very tight corners. Luckily they were all my trees!  Click this link to the pictures: 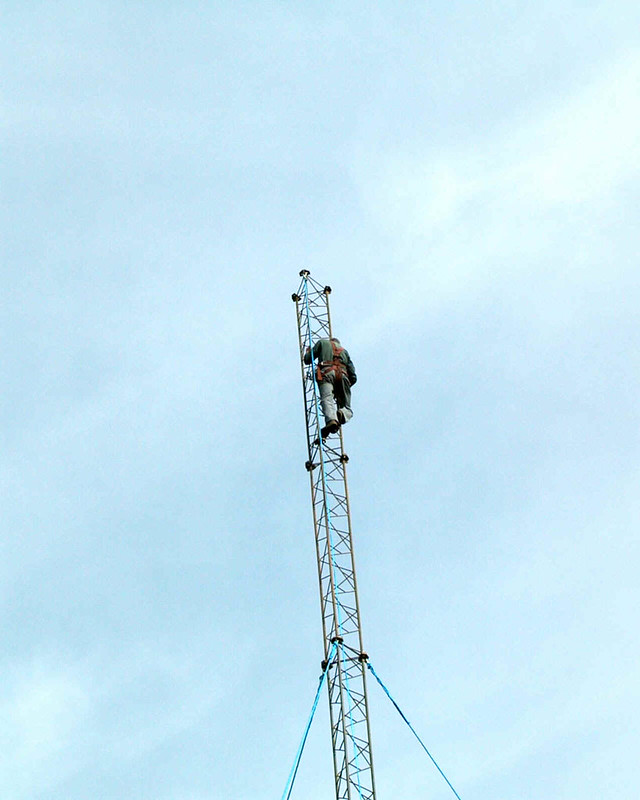